The annual celebration of the Karen New Year was held on Saturday evening at Highland Oaks Baptist Church, just across the street from Newport apartments in Garland, where a huge community of Karen now live. 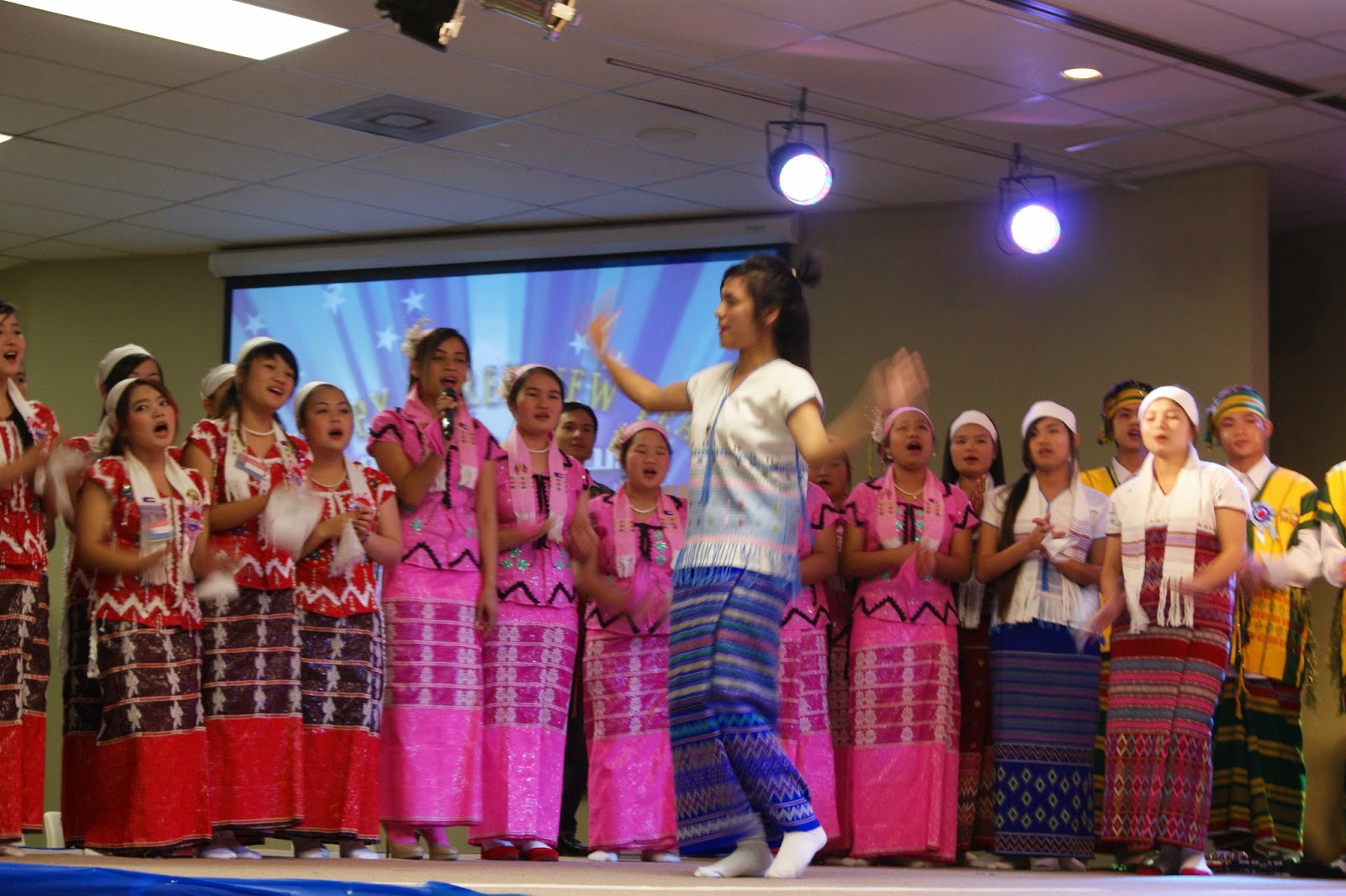 The 3 hour celebration was complete with dancing and singing by Karen youth groups from all over Texas, wonderful traditional food, and a presentation of the Karen tribe's history dating back to ancient Babylonia. 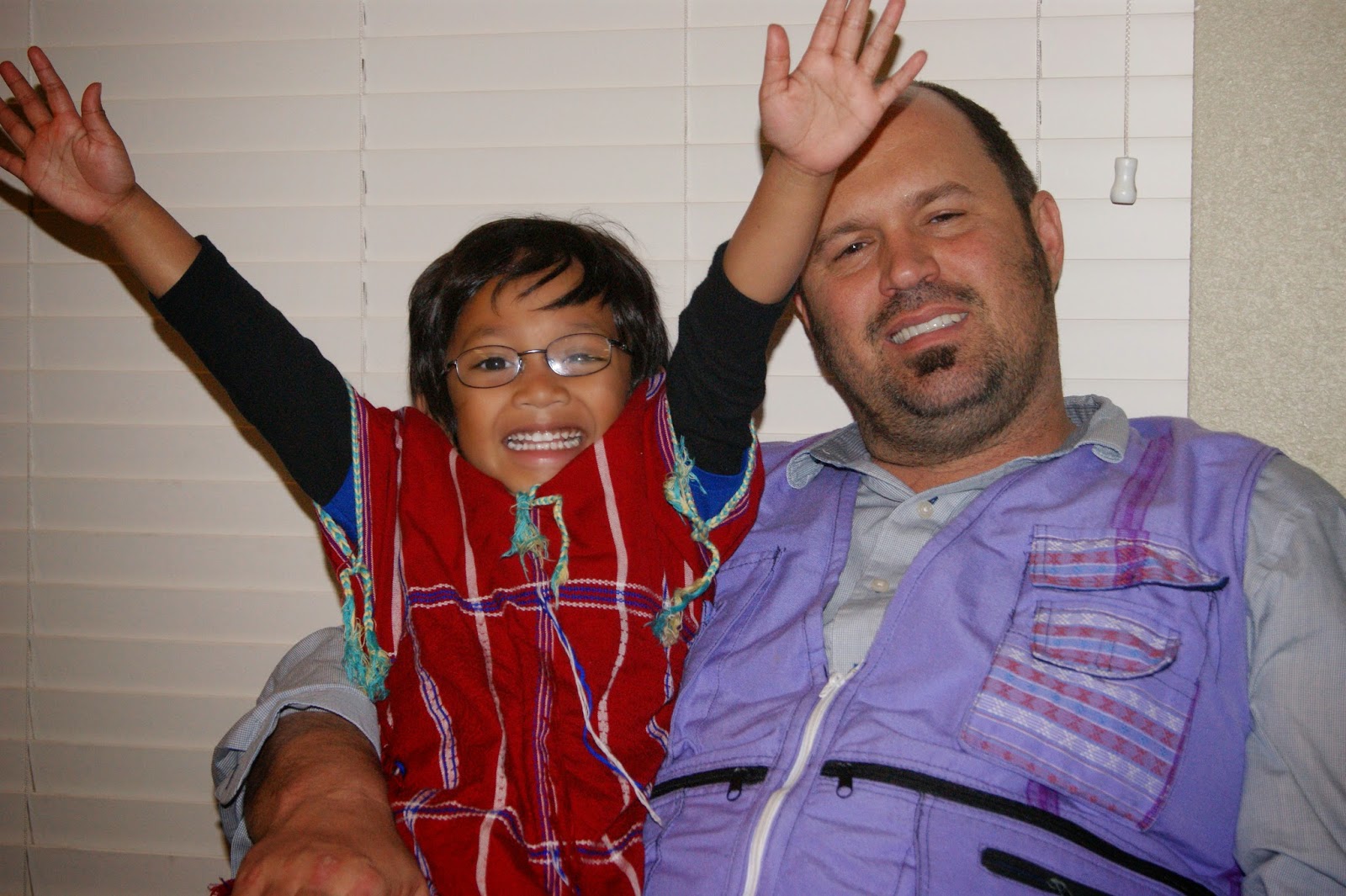 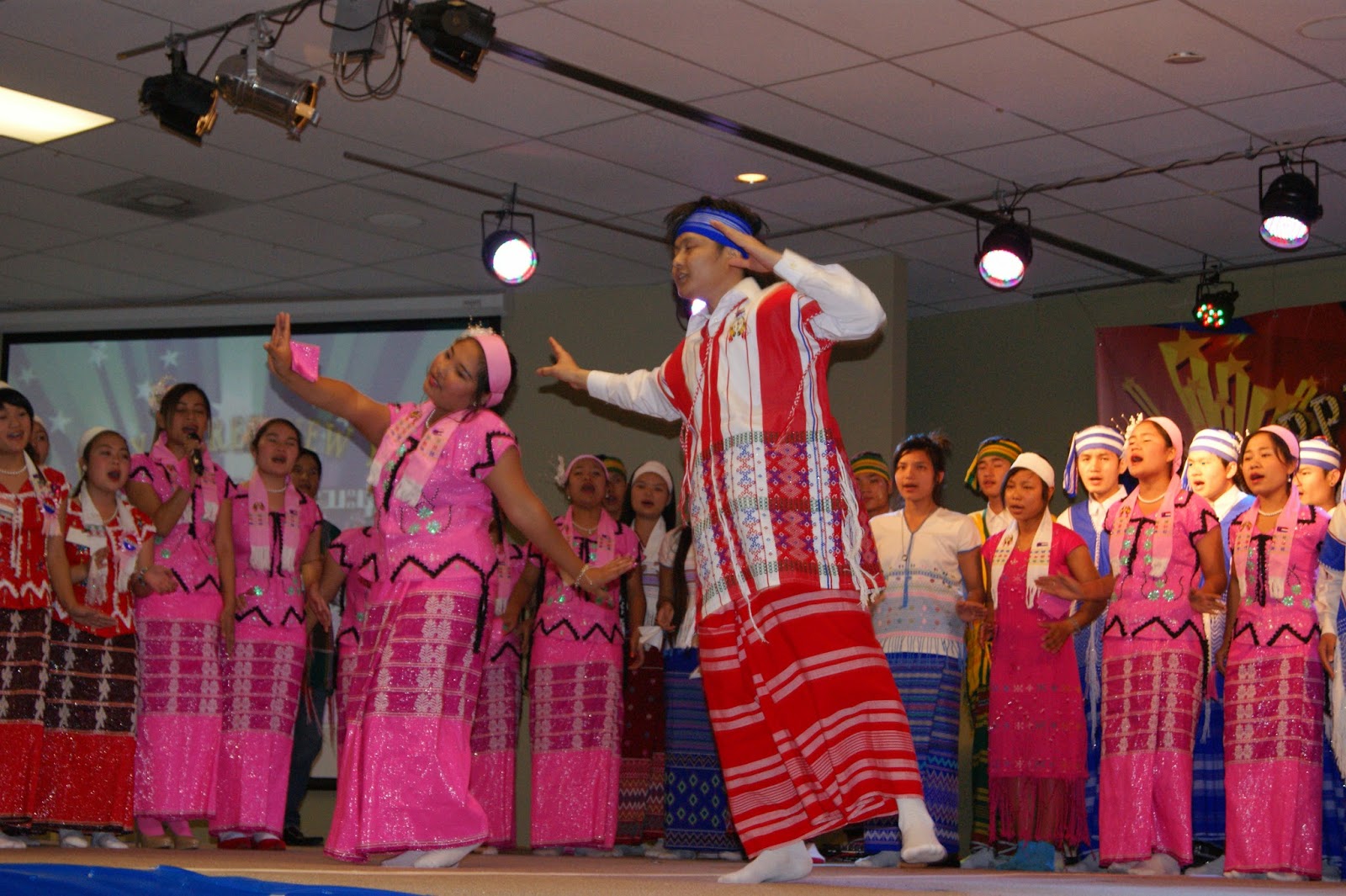 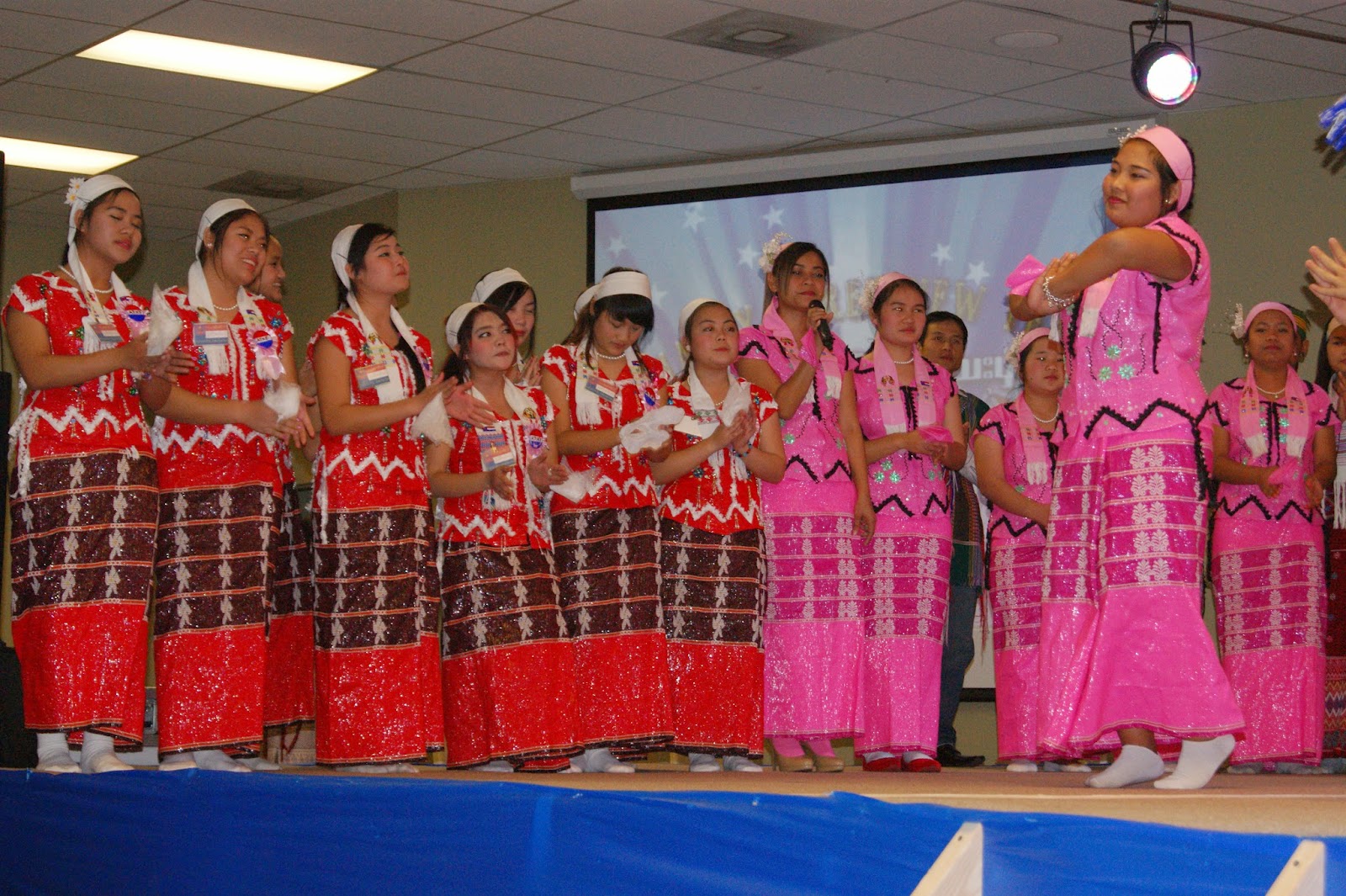 Having been involved in the Karen community for the past years, Aaron and I both noted how far they've come in such a short time here in America.  This celebration provided an opportunity to appreciate the rich cultural heritage of this resilient ethnic community, who has overcome so many obstacles and continues to persevere.  We continue to be honored to work with this incredible group of individuals in our community.
Posted by Aaron & Diane Mitschke at 11:15 AM No comments:

When word gets out in the refugee community that our flu shots are in, we have to brace ourselves for the deluge of families who come into clinic. I'm not sure if they are so pro-vaccine because of the time they spent in the refugee camps or what, but the refugees we serve LOVE them some flu shots! Despite the hectic pace of clinic the past couple of Sundays, we still managed to fit in some time for fun. Here's a photo of me, Daw Li and Sur Gay Moo modeling some of the wigs that were recently donated to the clinic! :) 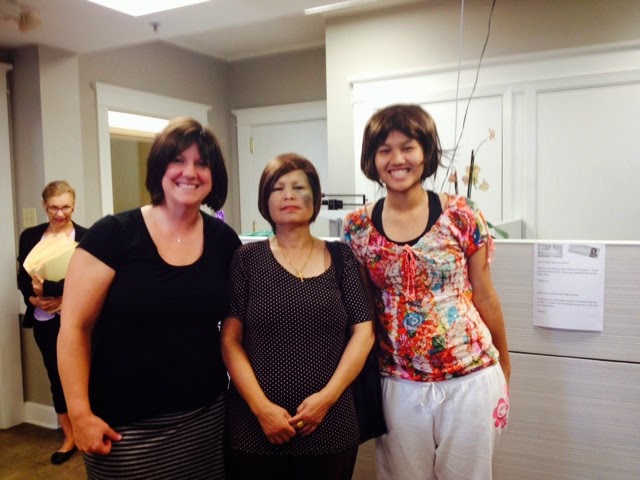 Posted by Aaron & Diane Mitschke at 1:06 PM No comments:

I apologize for the silence on the blog over the summer...our Sunday refugee clinic has been plugging away and continues to serve between 10 and 25 patients each Sunday afternoon.  We've seen an upswing in the number of refugees who come to the clinic solely for what we have termed "case management."  Rather than needing medical help, these individuals and their families come to the clinic for help managing and understanding bills they've received from hospital stays, dealing with problems with employers, medical and auto insurers, and apartment managers.  The Karen refugees that come to clinic are vulnerable and are often victims of scams.  As an example, one family came in for assistance on Sunday because they had received a letter from the US Treasury indicating that they were being audited based on their 2013 tax return.  As we dove deeper into the story, we discovered that they had used a fraudulent tax filing company to file their taxes.  This company charged this family more than $800.00 to file a 1040 EZ, and in all of the paperwork there is not a single indication of the name of the company or any method of reaching them.  Now we are providing assistance to this family to complete the audit requirements and help them in their communication with the IRS.  Needless to say, we do a lot of taxes for refugee families in the Spring of each year, and we always do it for free!
Posted by Aaron & Diane Mitschke at 12:27 PM No comments: 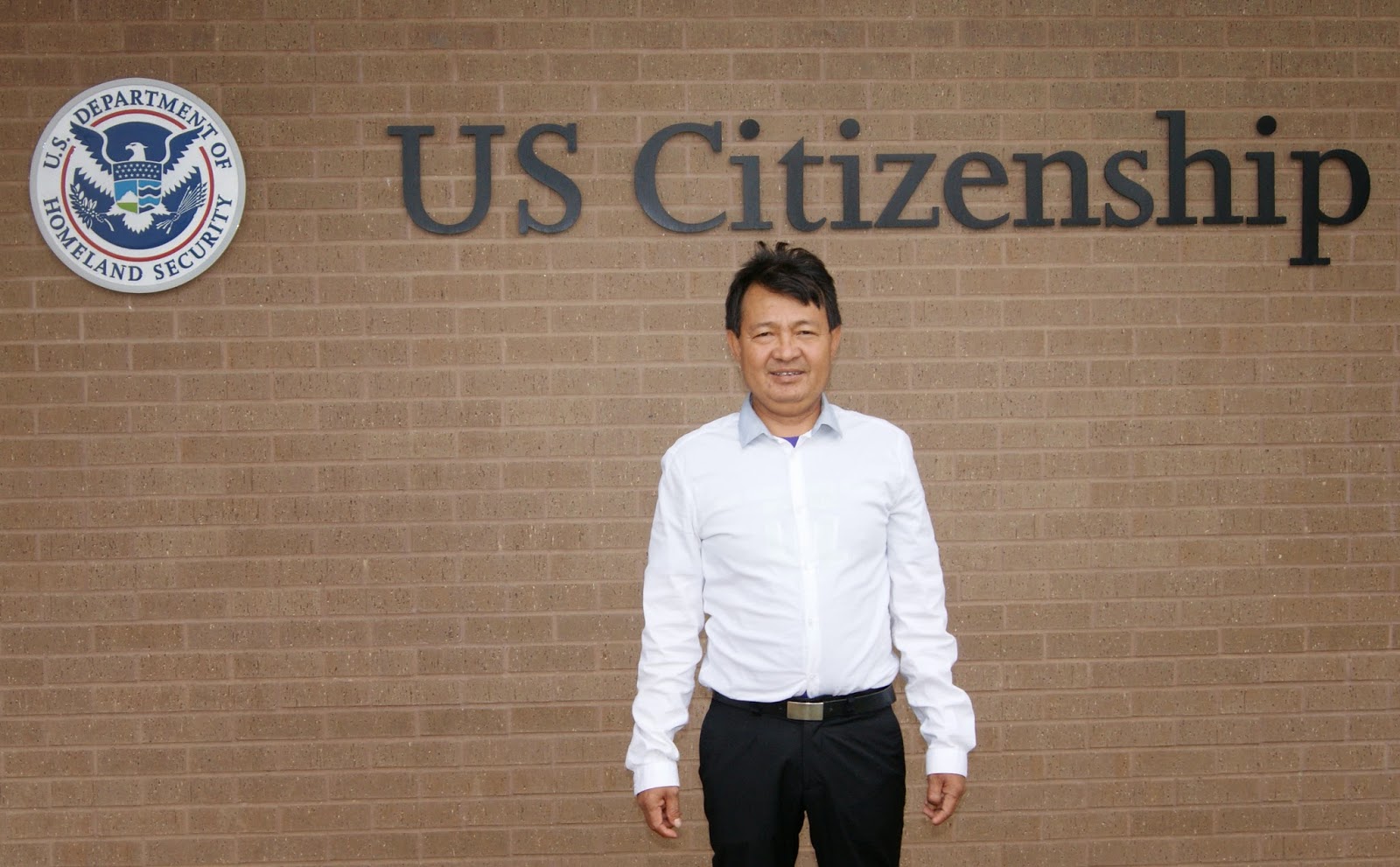 One of the most exciting things about our work with the refugee community is helping refugees navigate the process of becoming US citizens.  This is especially special when it is a friend we're helping.  This week, Pu Lue, one of our oldest and dearest refugee friends, became a US citizen.  He is so thrilled, and we share his joy in this tremendous accomplishment. 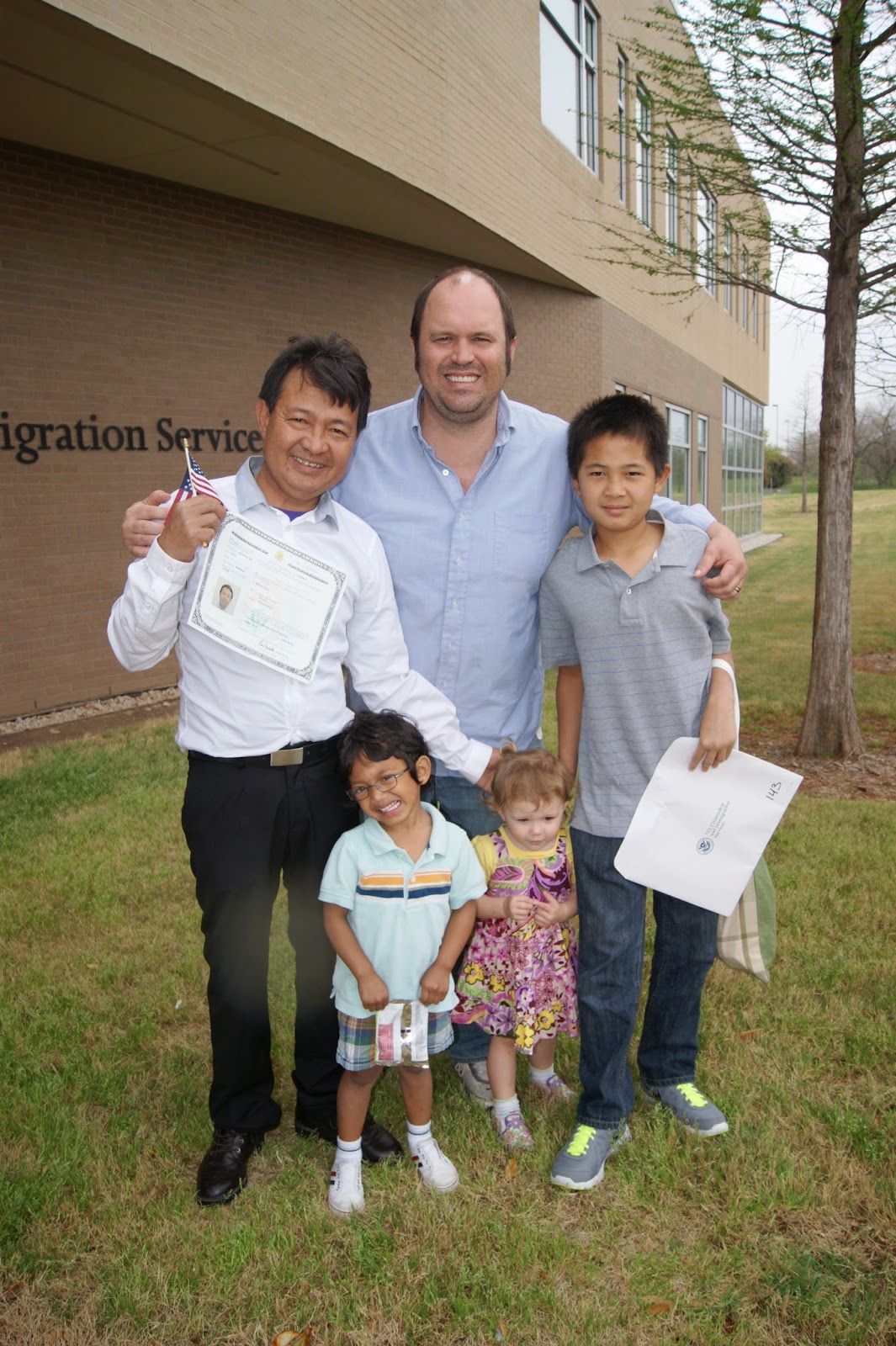 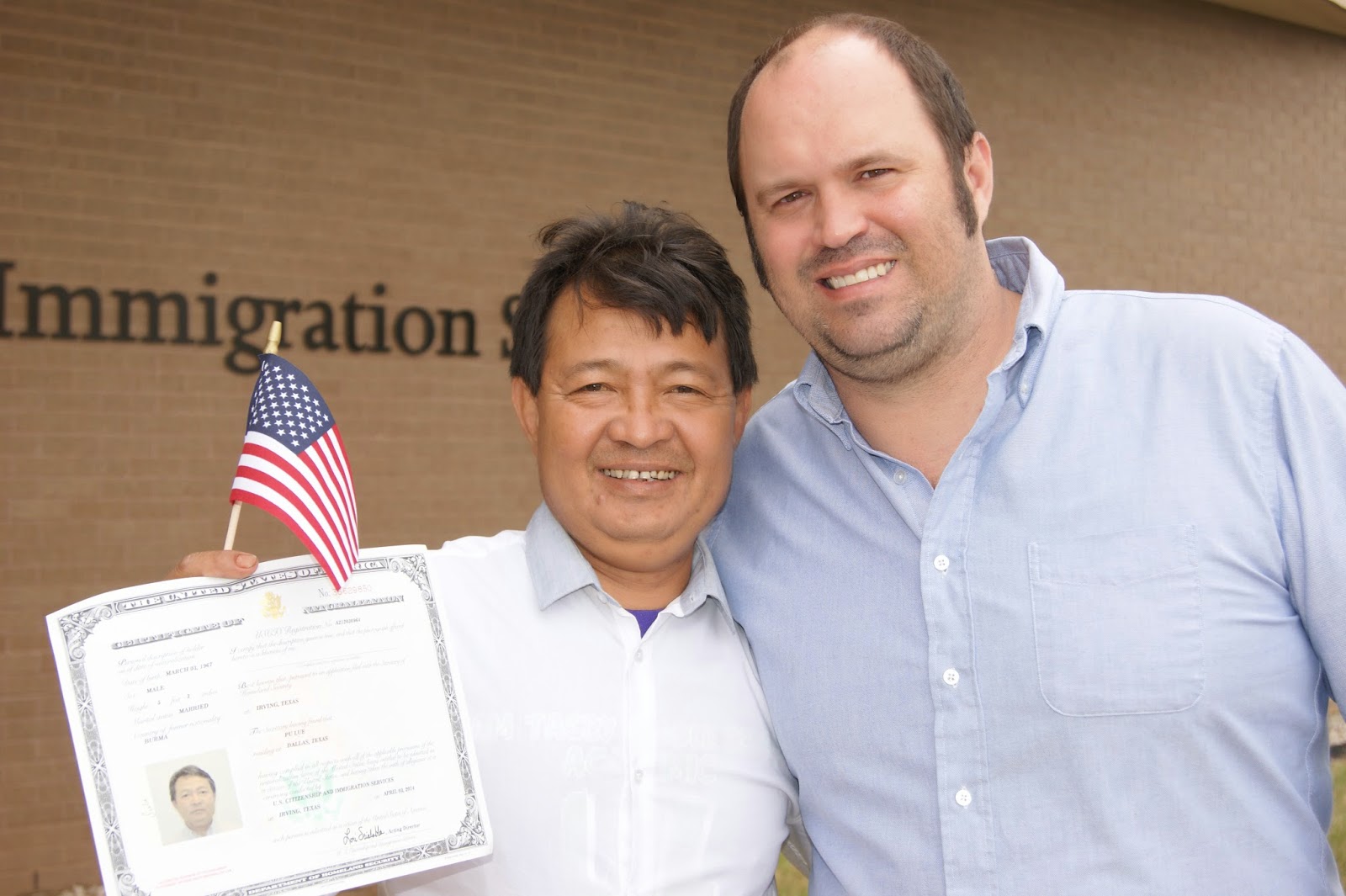 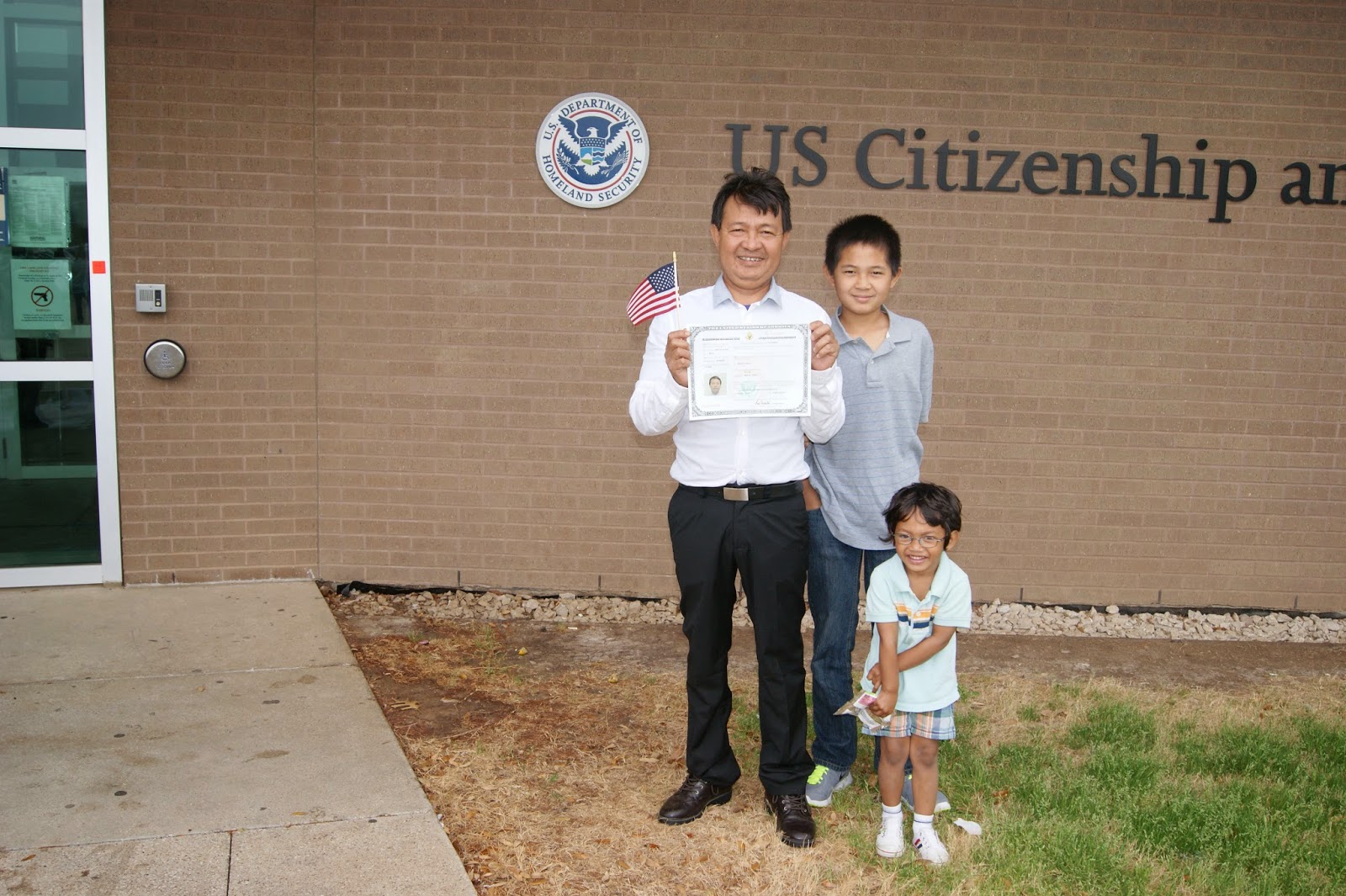 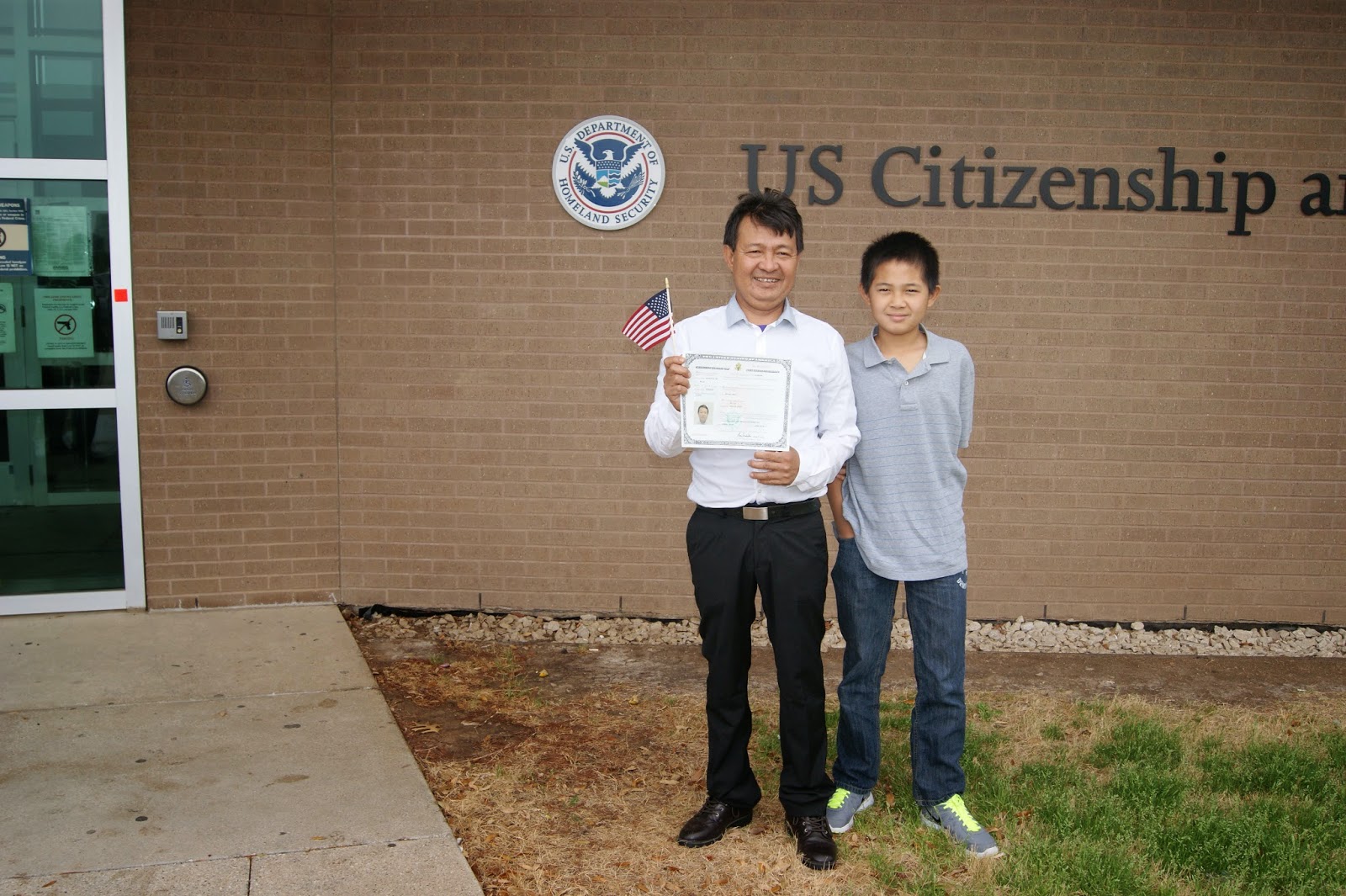 Posted by Aaron & Diane Mitschke at 1:47 PM No comments:

The gang's all here 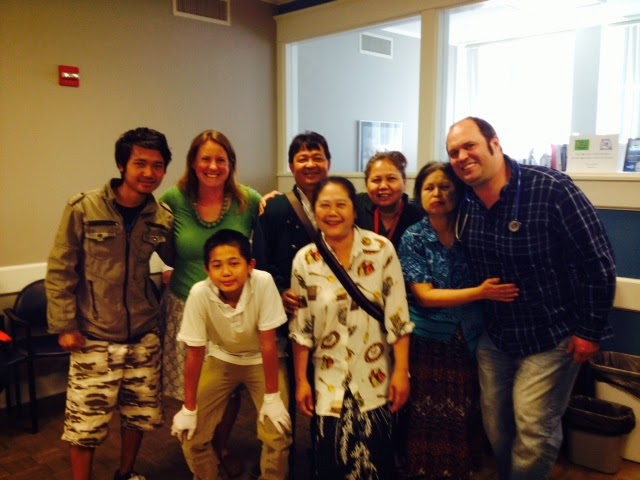 We've had a steady stream of patients on Sundays for the past couple of months.  We've definitely seen an increase in the number of patients who need social work assistance--applying for charity care to take care of giant hospital bills, dealing with collections agencies, managing medicaid and CHIP applications, etc.  Yesterday, though, was special.  Several of our oldest refugee friends came to clinic.  These are the people that we met 7 years ago when we first began doing outreach to the refugee community.  These folks are the ones that opened their arms to us, welcomed us into the community, and taught us about resilience in a way that we had never understood before.  These are some great people, and we are so happy to call them our friends.

Sunday clinics have been SUPER BUSY the past few weeks!  Our typical hours are 2:30-6:30, but for two of the weeks in January we didn't get finished until 8:30.  The flu has hit folks pretty hard, but we've had lots of other random illnesses and complaints as well.  On the social work side of things, we've been handling lots of medical bills and hospital bills as usual, and helping to facilitate the process of applying for charity care.  One of the exciting things that we've been doing lately has been helping individuals apply for U.S. citizenship.  Refugees who have lived in the U.S. for at least 5 years and can speak, read, and write English well enough to take and pass the Citizenship exam are ready to become U.S. citizens.  This is an exciting process, and one that is wrapped up with a lot more joy than many of the other things we help people with at the clinic. Here are a few photos of some of our cutest visitors to the clinic this month! 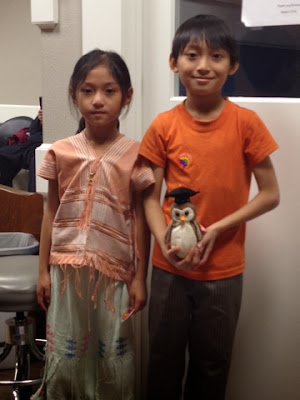 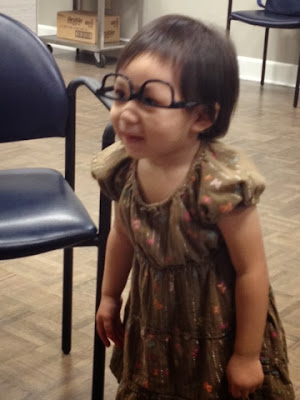 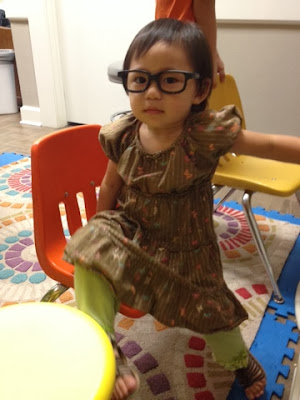 And here's our sweet Ruby Nell sleeping away in the arms of a beautiful Karen mother. 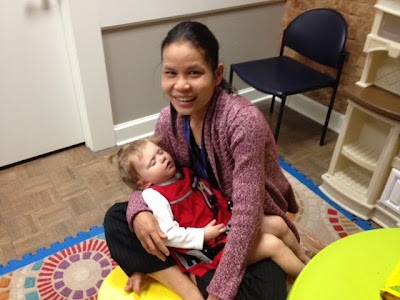 Posted by Aaron & Diane Mitschke at 2:34 PM No comments:

One of the many things I'm grateful for in our work with refugees is that I've not become hardened to their plight.  I think that sometimes when you're faced with so much sadness and despair, it becomes easier to close yourself off to really understanding and empathizing with people who are struggling.  These past few weeks, we've seen a lot of despair. 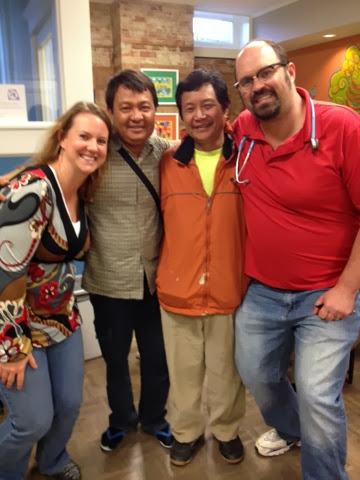 Kyaw Tow (pronounced Jaw Tow), a fifty two year old Karen refugee (in the orange jacket, above), came to the clinic and told us, in broken English, that he "cannot do U.S. anymore."  He saved up his meager earnings and used them to buy two one-way tickets back to Thailand, where he and his wife will attempt to sneak and bribe their way back into the refugee camp and live out the rest of their lives there.  This picture was taken the day before he left for Thailand.

It hurts my heart when I consider how we as a nation and as a community have failed people like Kyaw Tow.  I cringe to think that Kyaw Tow, and others like him, have experienced so many struggles here in America that they would choose to return to camp, where food is rationed, armed guards prohibit free movement, and health care is in short supply.  Here, in America, we make promises to these refugees that we don't keep.

We, here in the "land of opportunity," place broken and desperate individuals in shoddy apartments, in neighborhoods riddled with crime.  These refugees, fleeing unspeakable violence and torture in their home countries, desperate for a safe haven, enter the US filled with hope stemming the promise of a country that will protect them.  And yet, here in America, in the slums of our cities, these same refugees are battered and beaten by bullies, armed with fists and sometimes with guns, who prey on these most vulnerable in our midst.

We tell them, "Get a job; learn to speak English; try harder;" yet, we provide them with less than six months of meager financial assistance to become self-sufficient.

Half of the refugees we know are line workers at a nationally-based food processing facility.  They work 10 hour shifts cutting up chickens and make $7.25 an hour.  Another good portion of the refugees we know work at a cell phone manufacturing company, where they also make $7.25 an hour and work 12 hour shifts.  The chicken plant is considered by most refugees to be a "dream job" when compared to the cell phone factory.  Why, you might ask?  Turns out that talking is forbidden on the cell phone assembly line, and if you happen to forget and are caught talking with another employee by a supervisor, you are immediately fired.

It's a hard life.  In a recent study we conducted with refugees living in Fort Worth, we found that  mental health symptoms such as depression, anxiety, and PTSD, all of which are experienced as a direct result of being a witness to unimaginable and horrific acts of violence--murders, rapes, and torture--actually got worse over time.  This breaks my heart.

For Kyaw Tow and his wife, who've given up on America.

For Poh Naw, a 35 year old father of three young boys, whose wife died of congestive heart failure on their living room floor in August and who doesn't have money to pay for the funeral or this month's rent.

For Pah Day Day, who just finished his GED and wants to attend trade school, but needs help applying for financial aid. 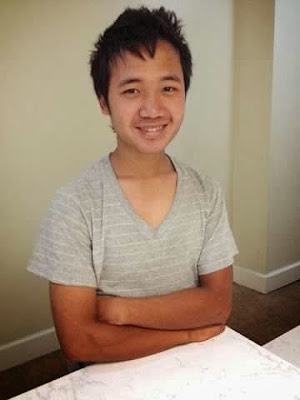 For Sher Loo, who is struggling to learn English so that she can support her daughter's school work. 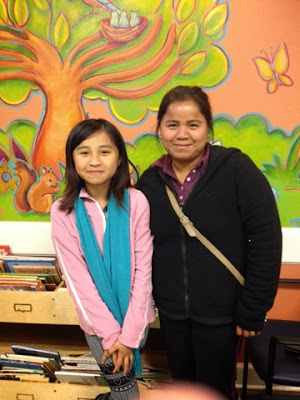 For Golden Hei, and his family of five who arrived in the US just last week and are overwhelmed with the enormity of it all.

For all of them, and for so many more to whom we've made promises but haven't kept.  Let's do better.  Let's work harder.  Together we can make America the land where opportunities and dreams are realized. 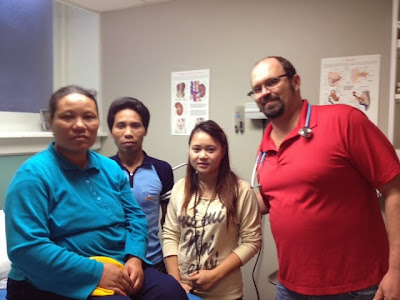 Posted by Aaron & Diane Mitschke at 11:41 AM No comments:

Check out our farm blog!

We'd love to introduce you to the refugees in our community! If you'd like to join us in our efforts, please email us at dmitschke at gmail dot com.